Hello, and welcome to a special edition of the Monero Missives: the 2015 Year in Review!

As you may know (or may not know:) we had an extremely busy January, which has led to this Missive taking its sweet time in being finalised.

The past year has been an interesting one for Monero. There was something of a reckoning as speculators realised that Monero was never going to be a pump-and-dump, rushing out a flashy GUI and ill-conceived features with no regard to the security of the network or the safety of our users. Those that stuck it out have seen steady, constant progress and steady, constant community growth. 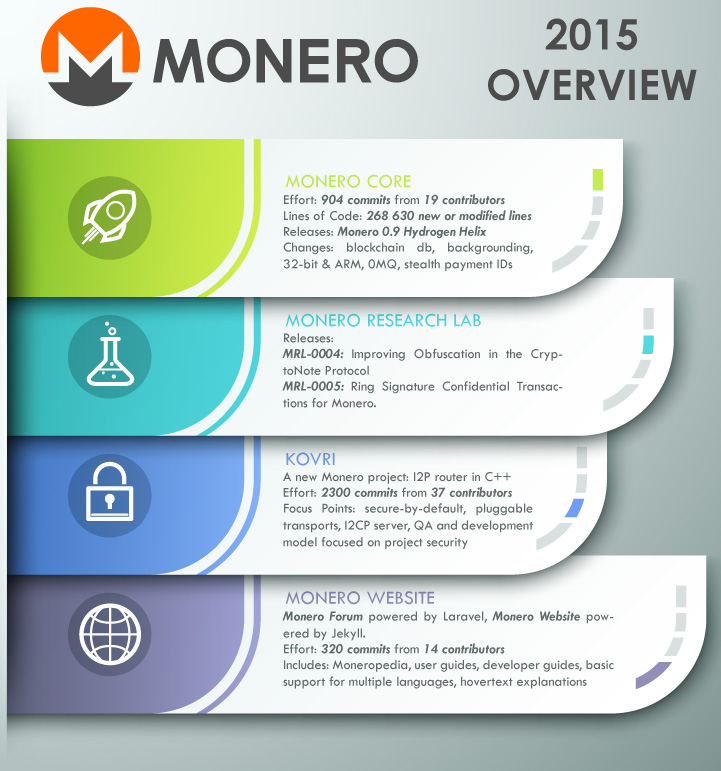 Over the course of 2015 we have considered Monero's governance model. In the context of cryptocurrencies and consensus systems, the term "governance" seems to be quite taboo. However, for anyone that has ever been involved in an open-source project, a lack of governance is as good as a death knell. An excellent article on governance models is maintained by OSS Watch, and they point out the reason for this:

There are almost as many variations of open source management strategies as there are open source projects. It is therefore critical that a project clearly communicates its policies and strategies to potential users and developers of the project’s outputs. A clear governance model also allows potential contributors to understand how they should engage with the project, what is expected of them and what protections are provided to ensure that their contributions will always be available to them. In addition, it describes the quality control processes that help to assure potential users of the viability of the project. The development and communication of a clear and concise governance model is one of the most important steps a project can take towards sustainability through open development.

Of course, we are primarily talking about the governance of the open-source project (ie. the source code in the monero-project repositories and associated systems and structures). The Monero network itself cannot be governed, and as has already happened just after Monero's launch, the project can be forked and effectively taken over if the core project is no longer considered viable. If that is the case, why bother with governance at all? Over and above the reasons mentioned in the OSS Watch article, it is important to prevent a gridlock in decision making. There are going to be decisions in Monero's future that will be extremely difficult to make, and if there's no clear path as to how they can be made then the project is very unlikely to grow.

When considering a governance model for Monero our main aim has been to find a balance between pure community consensus on the one hand, and the Core Team operating as "benevolent dictators for life" on the other. Neither of these governance models are desirable on their own, but there is a mixture of the two that we feel is well-suited to Monero. It is effectively the workflow we used last year when a decision had to be made on whether or not to change Monero's emission curve (ultimately it was decided against doing so); this is the workflow for decision making: 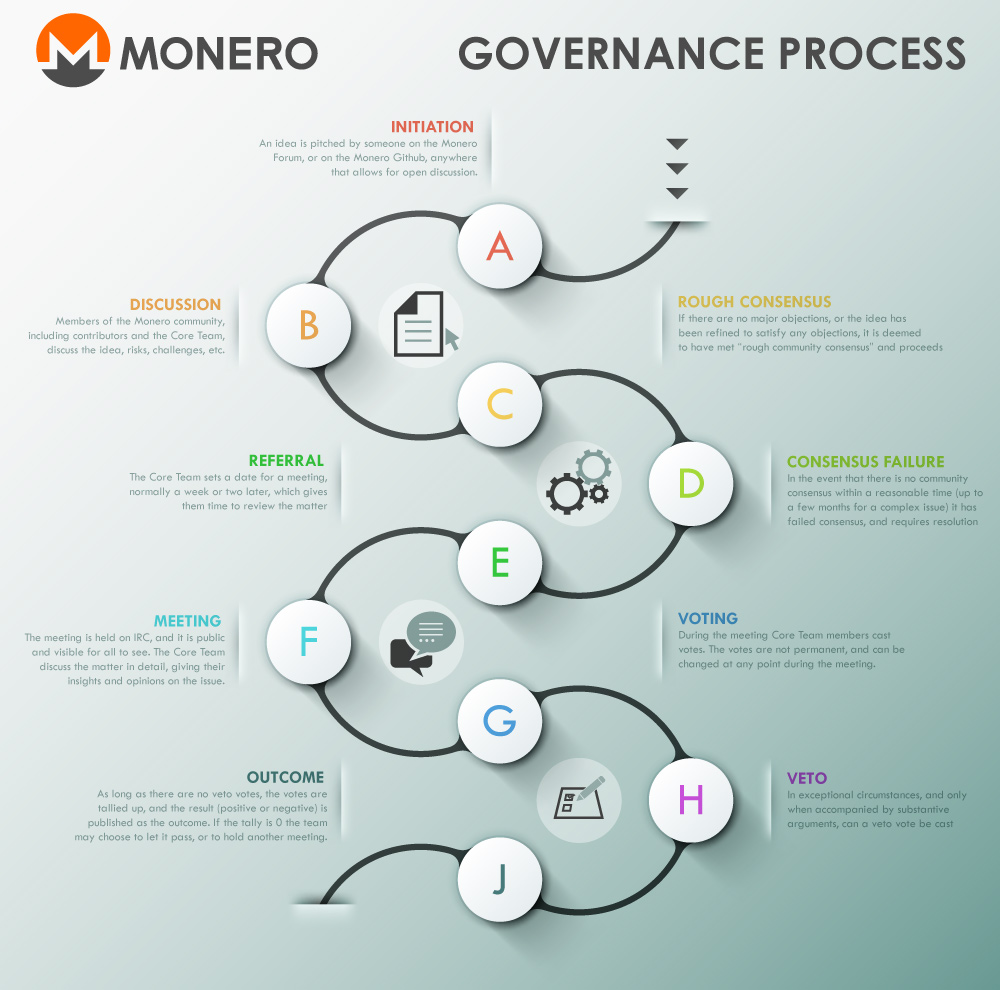 The Core Team, as well as individual contributors, can participate in all related discussions, but their opinions are not absolute or perfect. Community members are encouraged to test and push arguments, regardless of who is making them, until they are satisfied that the idea or change is workable or worth the risks.

The voting system that the Core Team uses is based on the CentOS voting system. Votes are not cast permanently, so a member can cast a vote at the beginning of the meeting and change it several times throughout. In order from disagreement to agreement, the following votes can be cast:

In the absence of any vetoes, the votes are tallied, which gives both the result of the vote as well as an indication of the amount of support (or lack thereof). If the votes add up to a negative or positive amount then the outcome is clear. If the votes add up to 0 that is normally an indication of no support and only small reservations, in which case the matter is not blocked by the vote, but it is also not particularly supported. In this event the Core Team may choose to hold another vote, optionally at a subsequent meeting a week or two later, if the matter is such that it requires more positive support.

Our hope is that this process will prevent Monero from falling prey to "design by committee", but also prevent "design by Wikipedia" or "design by the person with the loudest mouth / most eloquent writing". This process is currently up for discussion and comment; please feel free to provide input on it.

With that in mind, two members are no longer going to form part of the Core Team due to time constraints: David Latapie and eizh. Both of them have been part of Monero since its inception and the formation of the Core Team. We are immensely grateful for their efforts in the past, and any efforts from them in the future.

We have also elected two new members to the Core Team: Franciso "ArticMine" Cabañas, and luigi1111. Francisco is based in Canada, and holds a PhD in Physics and brings extensive business and non-profit experience to the table. He has actively researched and invested in cryptocurrencies since 2011, and focuses on the economic, social, regulatory, and long-term viability aspects of cryptocurrencies. luigi1111 hails from the Midwestern United States and is a sysadmin by day. He has been actively involved in several cryptocurrencies since 2013, and loves cryptography, probability, and English grammar.

We welcome them to the Core Team, and look forward to working with them both going forward.

Our financial situation has dramatically changed with the introduction of the Forum Funding System (FFS). We still have core expenses, some of which include the servers hosting our infrastructure, our test / build hosted machines, annual domain registration for core / MoneroPulse / MoneroSeeds domains, LibSyn's hosting and syndication of our Missives podcast, CloudFlare's services, our GitHub micro plan, and so on. We are quite grateful for those that have continued to send donations to the core fund, and where possible we have also used those to kickstart Forum Funding System fundraisers.

As mentioned in 2014's Year in Review, the founding members of the Core Team all put in a large portion of funds over the course of 2014, amounting to around 164.5 BTC, when donations were scarce. At this juncture we have not sought to recover those funds, as our focus is on building Monero up, recovering our donations at some later stage, if ever.

Some highlights of the FFS over the year include:

In total, excluding the GUI fundraiser, the FFS raised just over 48260 XMR over the course of 2015. Virtually all of the fundraisers were for direct open-source code development, and no payouts were made until a milestone had been met, and the community had reviewed the code and confirmed that the milestone had been achieved.

We can safely say that the FFS has been a fantastic success thus far, and we hope to see more projects being funded of a development nature, as well as of a promotional and educational nature (such as community members covering their costs if they go speak at a conference).

The FFS exists in a centralised manner today, but in the future we hope to host it in a more decentralised fashion (eg. using Tahoe-LAFS) and couple it with future systems like MoneroID and MoneroTrust.

For general housekeeping purposes we have decided to roll-over the donation addresses every so often, perhaps every year or two. Please take note of the new address details below. We have updated the donate.getmonero.org OpenAlias and other references, but pool operators and anyone else that auto-donates will need to update their systems accordingly. We will maintain the old addresses for some time, but will likely only check them sporadically and move any funds to the new addresses.

During the course of 2015 we published a set of Design and Development Goals focused not only on pure development, but also on research goals that the Monero Research Lab are pursuing. Typically the development goals are smaller, more immediate, and easier to achieve, whereas some of the research goals might not even be feasible, and others could take many years to find a suitable solution.

Nevertheless, over the course of 2015 we managed to complete 7 of the development goals and 2 of the research goals:

In many ways Monero's long-term design goals represent a fundamental shift in focus. Monero's primary use, at this point, is as a private store of value and medium of exchange. But since Monero has a global, decentralised, censorship-resistant timestamping database, there is a world of functionality that can be bolted on top. Thus, the aim with Monero is for it to become more than just a private cryptocurrency; we want Monero to become an entire suite of easy-to-use tools and systems designed to enhance personal privacy.

During 2015 we kept our collective heads down, focusing on the gargantuan effort required to get the database implementation running smoothly and implement the MRL-0004 guidelines. This culminated in the release of Monero 0.9 Hydrogen Helix on the first day of 2016. A full list of the changes can be found on the release page: https://github.com/monero-project/bitmonero/releases/tag/v0.9.0

Over the year there were 904 commits made to the main Monero repository, plus quite a few more to the development branch. Using the same methodology we applied in the previous Year in Review, this means:

The Monero Research Lab also had a busy 2015. Two main efforts were completed during the year:

One of the areas that Monero has long been focusing on is disconnecting the link between a transaction and the IP address of the node that was first observed broadcasting it, as this information often reveals the IP address of the transaction originator. Severing this link is vital, and it is not merely enough to support this functionality optionally through networks like Tor; it needs to be native and an inherent part of the Monero protocol.

With that in mind, our work with members of the I2P community has progressed from initially being involved with i2pcpp, to i2pd, and finally to an initiative from a few months ago: the Kovri I2P Router. Initially forked from a branch of i2pd, the Kovri project stands on its own in the Monero stable. It is not a mere side project, but a large fully fledged open-source project.

Nearly 2300 commits from 37 contributors have lead to just under 30000 lines of code, and the effort is ongoing. You can follow Kovri's progress on the Github repo: https://github.com/monero-project/kovri

At the beginning of 2015 we opened the Monero Forum. But we didn't stop there - the Monero website was also overhauled and released as a brand new site, powered by Jekyll, with a look-and-feel matching the Monero Forum. The website is open-source and can be found here: https://github.com/monero-project/monero-site

Since its inception, the Monero website has had over 320 commits from 14 contributors. The community has been fantastic at supporting the initiative and helping shape the information on the site. As we roll out new tools to make contributing to the site even easier, we can only expect this to grow.

We accomplished a great deal in 2015, with ever more to do. In 2016 we are hoping to tick more items off of our Design and Development Goals, and continue the slow and steady move towards Monero becoming a privacy suite.

We hope you will continue with us on this journey, and we look forward to an excellent 2016!