This release attempts to contain the opinions of the Monero community. It is possible that not every viewpoint is expressed, but this paper includes the best response to the author's ability that encapsulates all these opinions. The author opens all discussion to how certain viewpoints are represented, and the purpose of this response is solely for easier documentation by interested parties. He has done the best to include sources wherever possible, and to be as accurate as possible. For any concerns with this publication, please express them to the author's Reddit account or on the Monero subreddit. This version has been updated for clarity, though the core content has remained unchanged.

The Monero contributors and community at large always appreciate any research done on Monero's technology. They heavily encourage constructive criticism of all cryptocurrencies.

The Monero contributors appreciate the effort that has gone into this mentioned publication and research methods. It helps quantify several realizations that had already been known to the Monero community at large for a long time (ref: MRL-0001 and MRL-0004), including the following:

The following are the recommendations listed in the paper and responses to them:

The Monero community would like to list several concerns with this research paper. They are documented below:

We appreciate the effort that went into this research paper, but we suggest the following changes for later improvements:

Figure 5 from the report showing the fraction of deducible inputs. Notice the large drops following block height 1,000,000, when 0-mixin transactions were prohibited. Furthermore, these inputs likely do not include all those used in a single transaction. For instance, for a mixin 9 transaction, 5 may be deduced. This means that the inputs would be reported here as deducible, even if the transaction is not traceable.

Table 2 from the report showing the proportion of transactions with a positive mixin that can be deduced. We want to make clear that the findings of this chart and analysis method have absoutely zero relevance to RingCT transactions.

Table 3 from the report showing the proportion of deducible transactions where the real input is also the most recently used one in the transaction.

Examples of statements we find misleading

This is a tweet from a contributor to the paper. 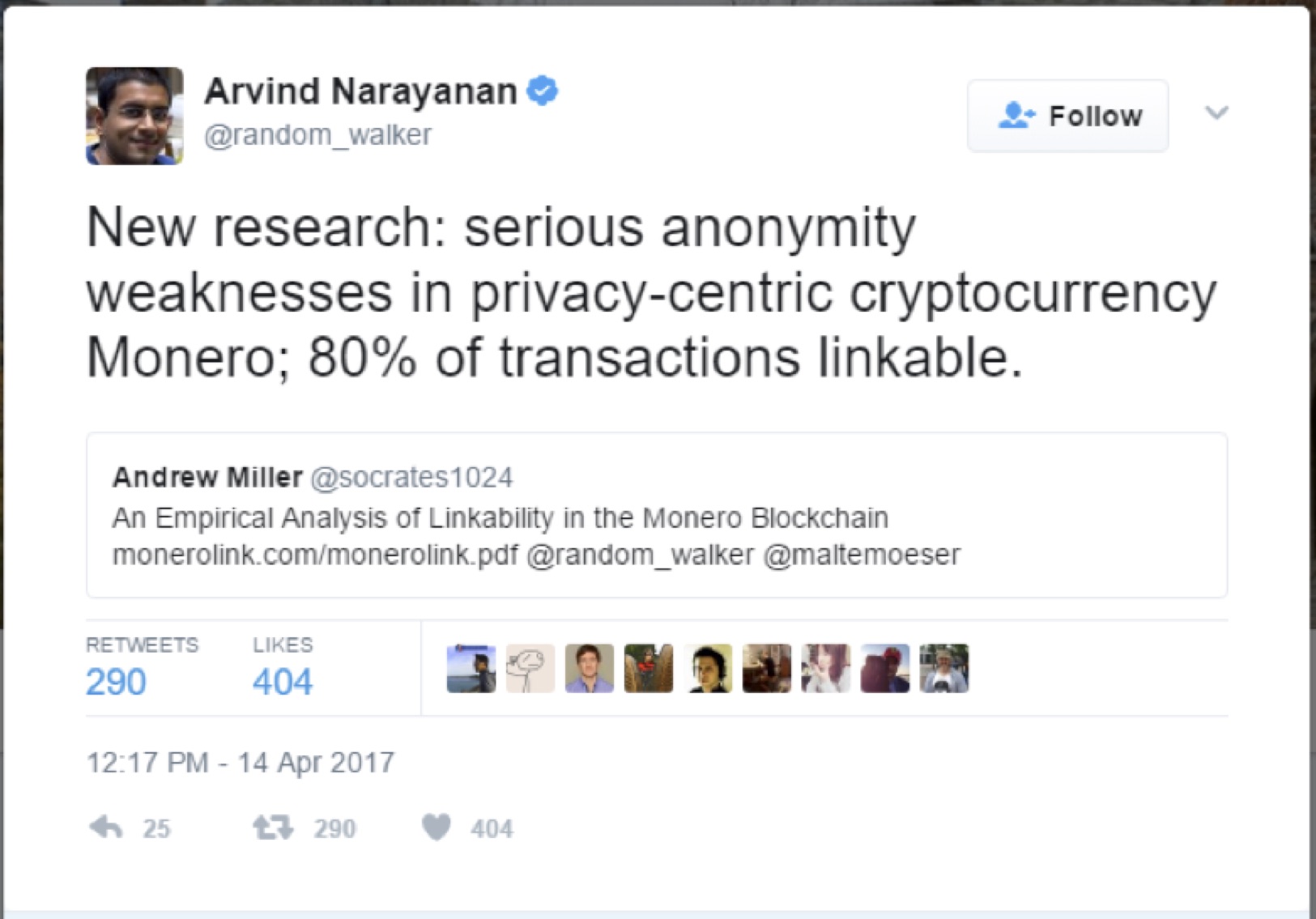 This image is from the CoinTelegraph interview. Based on the wording, you may think an attacker could determine with certainty which input is yours. However, the attacker can guess and be correct less than half of the time. Furthermore, even if the attacker guesses correctly, there is no way of proving this with certainty with data from the blockchain alone.

Andrew Miller asked us to include other statements from the researchers or ZCash Foundation members that we feel is misleading. This paper is not supposed to be a comprehensive list of such statements. It is only useful in providing a few examples.

This draft was shown to Andrew Miller before release on the website. Some of his considerations have been included in this response.

Developer Opportunities at the Monero Project